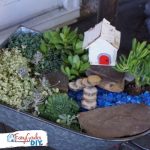 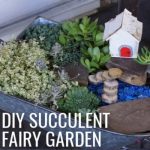 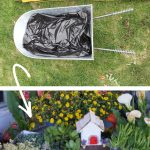 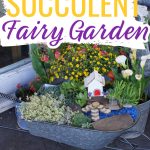 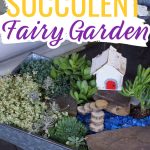 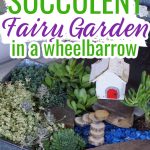 Succulents are some of my very favorite plants for fairy gardens (indoor and outdoors).

I found a wheelbarrow planter at the hardware store earlier this summer, and I KNEW it would make the perfect succulent fairy garden.

I almost never buy planters NEW, because honestly, they’re the kind of thing you can find all over second hand – garage sales, thrift stores and on FB market place, for example.

But this one was just really cute, and I needed it for my succulent fairy garden, so I splurged, haha. (This wheelbarrow planter on Amazon is very similar!)

This was the perfect sized planter to allow quite a few succulents to thrive, but also to allow enough space for the fairies to roam… AND it was still small enough to bring indoors over the winter! (That is really important, because succulents just don’t love to be left outside at -30 degrees.)

Preparing Your Planter for Succulents

If your planter is going to live outside all year round, drill holes in the bottom for drainage.

Drowning my plants is something I do regularly, and I’ve learned the hard way to DRILL HOLES.

HOWEVER, because I had plans to bring this one indoors in the winter, holes aren’t ideal; I don’t want it draining all over the hardwood.

With this in mind, I lined the wheelbarrow planter with a garbage bag and then added a layer of rocks (which of course I forgot to take a picture of. I get over-excited about planting fairy gardens and I forget to take process pictures. Sigh.) 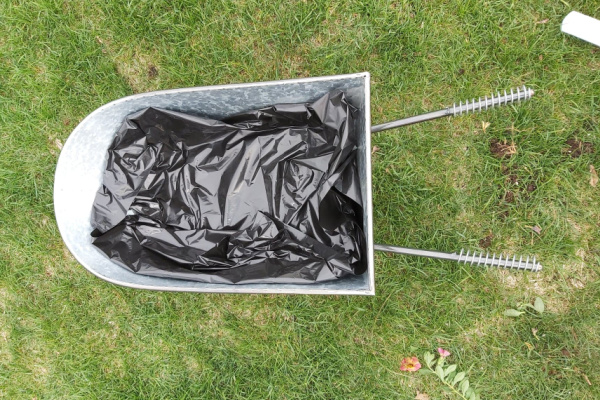 On top of the rocks I placed lots of good soil, and filled the planter to about one inch below the edge.

Choosing and Planting Your Succulents

So, I have a confession to make.

This site (and my expertise) is not about PLANTS.

I have no “official” idea what the succulents I chose for this garden are actually called.

The nursery where I love to get my perennials each year has a whole section of tiny succulents at the back, for 4$ per plant. The aren’t marked with a name tho… so I just choose things I think are beautiful!

Here’s what I believe is growing in my succulent fairy garden:

Regardless of what your plants are called, there’s one really important rule – choose a few ground cover plants, and a few “bush-ier” or taller plants!

This gives your garden more character and makes it more interesting and appealing, in my opinion.

Because this is going to be a succulent fairy garden, it’s important to plan space for your fairy garden accessories, and one of my favorite ways to do that is to plonk a few large flat rocks into the dirt as “place holders”.

(The rocks will also keep the plants from creeping into the “fairy space”.)

I planted my plants when they were pretty tiny, left them sitting with my rocks in place, and sort of put this project on the back burner.

When I got back to it over a month later, the plants had filled in REALLY nicely!

I started adding the “fairy garden” part of this succulent fairy garden by fiddling with where the fairy house should sit (I used a concrete fairy house with a simple polymer clay door for this garden). 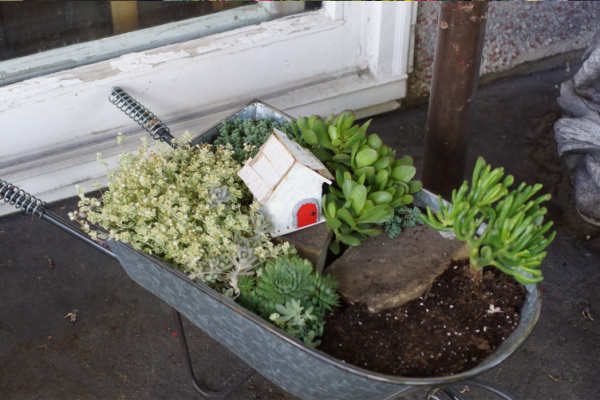 With the rocks as they were, I just COULD NOT get happy with the placement of the house!

It’s hard to tell in this picture, but the 2nd large flat rock (the one the house is NOT on in the picture above) isn’t very level.

There was really NO place on this rock for the fairies to have anything going on.

No chairs with tea, no playground, no garden…

it was really frustrating.

Clearly there wasn’t enough room for the fairies to exist, so I added another rock. 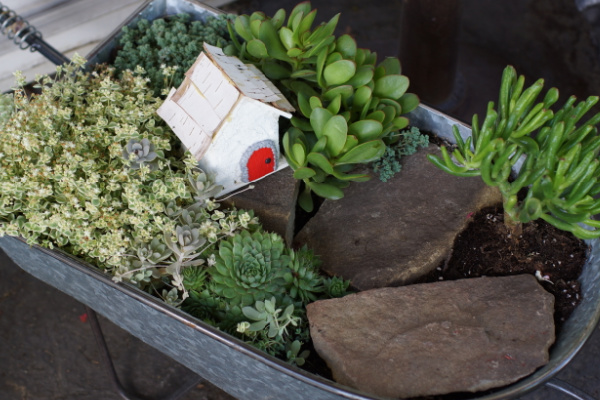 Because of the height difference in the rocks, the fairies needed stairs.

I used these wooden coins I got from the dollar store to create stairs. (You can also get them on Amazon.) 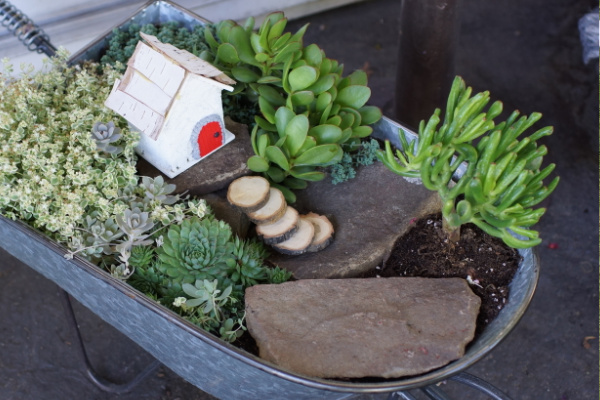 This was better… ish, but I was unhappy with all the dirt showing. (I don’t LOVE my fairies to have get their feet dirty.) It feels unfinished. Like no fairy would actually CHOOSE to settle here.

So I decided to add a lake. (I used blue glass gravel vase filler.)

AND move the placement of the house and stairs. (Fairy garden building takes experimentation!) 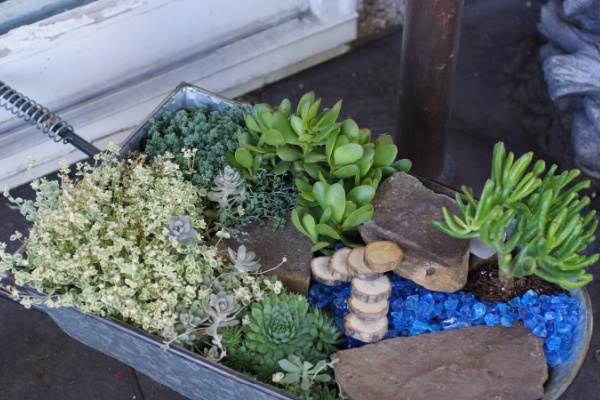 It took some fiddling (adding extra rocks) to get the house level. 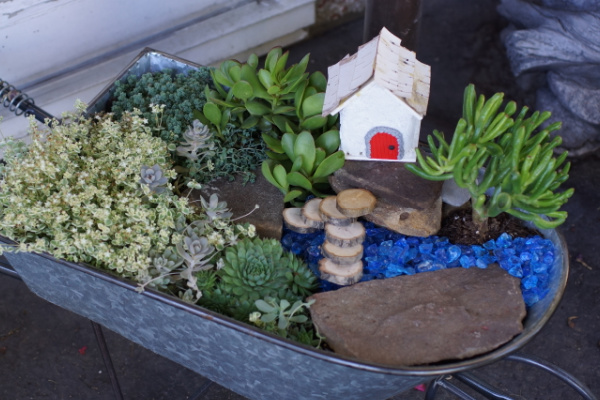 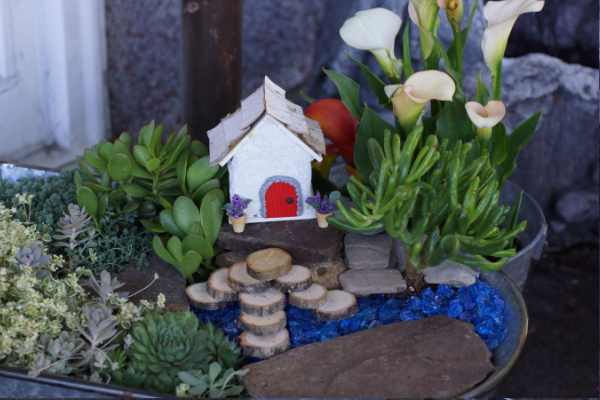 And I was SUPER happy with how this little succulent fairy garden turned out! 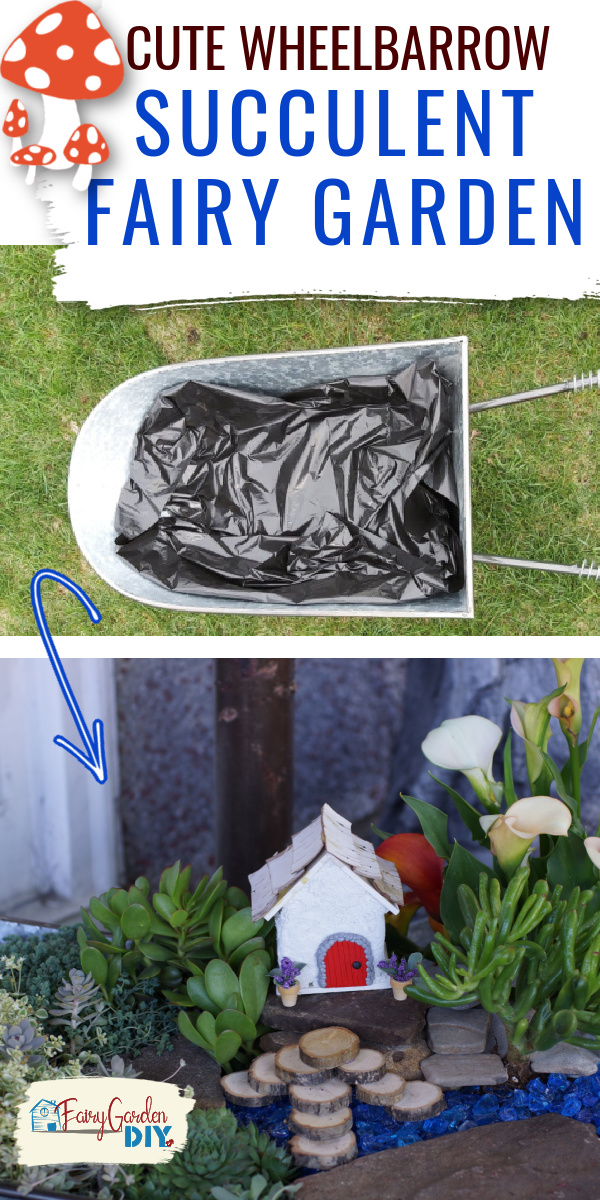